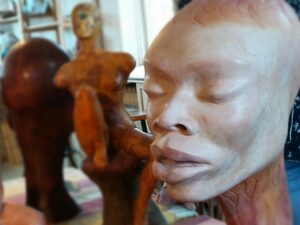 While working on our film, we encountered a very interesting study that has been recently conducted by a group of researchers from School of Chemical and Biological Sciences, Queen Mary, University of London, London, United Kingdom and Department of Psychology, Goldsmiths, University of London, London, United Kingdom. The title of publication is Spontaneous Visual Imagery During Meditation for Creating Visual Art: An EEG and Brain Stimulation Case Study. Interestingly, the study was inspired by an artist!

Please read the excerpt from it below. The full article in PDF format can be downloaded HERE.

‘A New York-based internationally-exhibited artist, Lia Chavez (L.C. afterward), took part in this study. She is among Origin Magazine’s Top 100 Creatives Changing the World for 2015. Her work explores the phenomenology of light and the possibilities of using consciousness as an art material. She initially approached one of the authors (J.B.) detailing her experiences of spontaneous visual imagery during meditation as a source of her creative inspiration; subsequently, she expressed her willingness to participate in neuroimaging experiments to investigate the correlates between functional brain activities and “the profound moments of interior visualizations … revealing the inception of the creative spark …” (L.C., personal communication). L.C. has been practicing meditation intensely for over 10 years, including periods in which she meditated for lengthy periods of time (up to 10 h a day for 2 weeks at a time). Her meditation practice includes two different types of meditation according to Tibetan Buddhism: stabilizing and analytical (Chodron, 2007). Stabilizing can be considered as a strategy for quietening the mind by focusing the attention on simple repetition of words or mantras, on the breath, or even on a symbol within the mind. This type of meditation relies on serial repetition with the purpose to prepare the mind for a deeper kind of focused contemplation. The analytical meditation, on the other hand, is that state of deeper contemplation in which the meditator experiences a quiet mind in order to obtain a conceptual understanding of how things are, to a depth that would offer enough clarity and novel insight into the true nature of that concept. Both types of meditation can usually be combined within a single meditation session. L.C. reports using a variety of stabilizing techniques such as repeating a mantra, focusing on the pause between the in and out breath, and focusing attention on different body parts to generate heightened sensation. L.C. reports that once her mind is stable and a threshold is crossed, she goes into analytical contemplation which is the state that she experiences the spontaneous visions, which she calls “encounters with light.” During these spontaneous visions, she reports trying to remain detached from any emotions or judgments associated with the visual experience. This is how she describes her experience:

“I integrate a variety of cross-disciplinary contemplative traditions into my artistic process as a way of exploring the inception of the creative spark, how the creative artist’s own ontology of becoming incarnates into art objects, and how this process might relate to the cosmological order. Durational analytic meditation is at the core of my process. As I’ve journeyed through deep meditation into the vast unknown of my own inner landscape, I’ve discovered that the silent mind is, in fact, the seeing eye within a great storm. In deep analytical meditation, I experience cataclysmic visions of vortices, fibers of electricity, clouds of short-lived photons, cascading firebolts, and embryonic stars. It’s a process which feels as though I am observing passionate and terrifying dances between the elements — a mental meteorology, if you will. As an artist who has always worked with light as a primary art material, you can imagine how powerful it was for me to encounter this experience for the first time in 2012. In time, I’ve come to discover that experiences of meditation-induced encounters with light is a widely-documented phenomenon throughout cross-cultural meditation traditions, most prominently within Buddhist meditation practice. Since first encountering these visions of luminous objects, I have cultivated durational analytic meditation as a source of inspiration for my visual and performance artwork.” (L.C., personal communication). During her work, she depicts each vision on canvas with her eyes blindfolded. One example of the results can be visualized in Figure 1B. Her mixed media drawings are generated through several hours in a meditative state while continually blindfolded without sound. As she works, she positions herself atop the canvas surface and fashions complex gestural glyphs to depict her visions as they occur.’